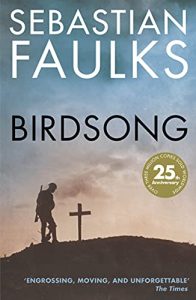 I finished Birdsong by Sebastian Faulks last night and I am still thinking about it this morning.

Beautifully written, with some mesmerising imagery that touches every emotion, the story details the elation and desperation suffered by a young man as he is taken from the bed of his married lover to the tunnels dug deep below the enemy lines as the insane battle rages on the Somme. Stephen is a complex character, not really an anti-hero but not always likeable, who, following serious injury, refuses home leave and a job in the relative safety of the staff quarters because he wants to know, how it all ends. As his friends fall about him, Stephen details his daily life in the trenches in a series of coded diaries which are later found in an attic by his granddaughter some sixty years on.

Despite the beauty of the prose, Birdsong is not a novel for the faint hearted. Faulks’s description of the horrific conditions suffered by the men under Wrayford’s command are described in stark detail as the madness of the war is laid bare. No punches are pulled. From the lice infestations to the dreadful food rations, Faulks captures the misery and despair of the front line, yet, amongst the madness and slaughter are moments of real, heart-warming, compassion when dying friends are held close as they breathe their last.

My only criticism of the book are the sections written in 1978 where his granddaughter begins to take a bit of an interest in her family history. I found this quite an unnecessary addition and would have been much happier just finding out whether Stephen survived the war in one piece and whether his bourgeoning relationship with Jeanne was continued.

Birdsong has now been placed on my small, ‘must read again,’ list. The last novel that earned that award was The Book Thief.